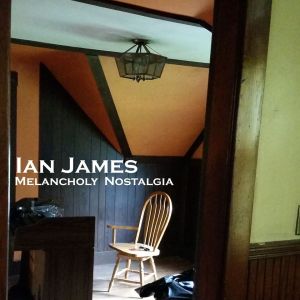 Sometime during the explosion of the digital do-it-yourself era, professionals like Pink Floyd’s David Gilmour, The Byrds Rickenbacker ace Roger McGuinn and others spoke about musicians having little need to go into a brick and mortar recording studio ever again. With that idea in mind is singer, songwriter and multi-instrumentalist Ian James’ collection, Melancholy Nostalgia. Available Jan. 24, on the Blue FX Records label, James’ solo effort contains eight original songs and a cover from the band Hello Echo.

Right out of the gate, the opening track from Melancholy Nostalgia, “Wishing for a Friend,” emits a retro vibe, strong with a thick, trippy guitar tone. The song structure has a classic feel and rhythm, yet refrains from an all-out psychedelic excursion. The vocals, hard rock with perhaps a punk-ish infusion, are clear and lend a particular authenticity to the song, as well as to the general album. Cut number three, an album favorite, is the 2:40 “Bula Vinaka Beach Side,” an electric guitar instrumental which ends much too soon. The picking goes well up against the metered percussive beat.

There is no shortage of guitar-driven songwriting on Melancholy Nostalgia.” “Shooting The Pipe” is another fret-focused track, roaring with 2:44 of hair bending, nostalgic laced fuzz. Meanwhile, “Return Departure” exhibits a concentrated sonic heftiness. On other titles, including “Come-On-A-My-House,” (not Ross Bagdasarian’s 1951 song made famous by Rosemary Clooney), as well as Melancholy Nostalgia’s version of “Disconnect Me,” James is fond of having a wavering tremolo in the mix. In order to find out more about Melancholy Nostalgia, Ian James provided musicinterviewmagazine.com with some questions and answers about the making of the album.

Musicinterviewmagaine.com: Can you tell us a bit about single-handedly performing and recording all the songs on Melancholy Nostalgia? Do you sing and play the instruments too?

Ian James: Great question, thanks. The band is just me. I write and perform all the parts in my home studio. Instruments used on the album include a Zoom digital rhythm machine for the drums and percussion and a Fender Stratocaster and Fernandes Dragonfly for the electric guitars. I also use an Ibanez bass and a Yamaha EX7 for the keys. On the “Disconnect Me” cover, Doug Johnston provides backup vocals.

Did you use amplifiers in recording Melancholy Nostalgia?

No amps were used. All guitars were run straight into a Zoom digital 8track recorder, used for production. No computers were utilized until mastering, which was done online with e-mastering.com. Some hand percussion is used as well.

Among Ian James credits are multiple songs in several episodes of television’s “Urban Explorers,” which aired on The Discovery Channel.

Melancholy Nostalgia is available on all digital formats.