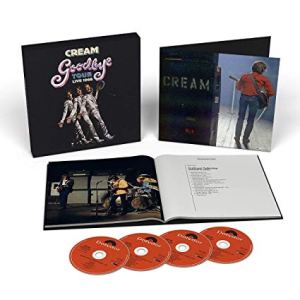 While streaming audio and subscription services lead the way in listening trends, labels continue to pump CDs and vinyl through music retailers. As a result, hungry consumers clearly do have more to choose from. But artists typically have little say regarding how their music is sold. Some have passed away. So, what is the point of all the recent repackaging and anthologies? The content suggests business over creativity, which may or may not always be the case.

Available as a CD pre-order with a Mar. 6, 2020 release date, Cream – Goodbye Tour Live 1968, a four-disc set, features concerts from Oakland, Los Angeles, San Diego and The Royal Albert Hall. There are 36 tracks with 29 offered for the first time. For Clapton and Cream devotees, this is good news. All the signature songs are there, including “White Room,” “Sunshine Of Your Love,” “Politician” and others. But these songs are already available on other Cream albums, including Wheels Of Fire and Live Vol. II. Acknowledging the fresh mastering, technology has made it possible to look back on music history with a bit more clarity. But after more than 50 years, is there really anything new here, creatively speaking?

Also recorded over half a century ago and being released on Feb. 28, 2020 is Eric Burdon & The Animals – When I Was Young: MGM Recordings 1967-1968. Burdon’s original Animals was a radio-friendly blues rock group with several enormous hits which spoke to the language of youth and rebellion, including “We Gotta Get Out of This Place,” “It’s My Life,” “Don’t Let Me Be Misunderstood” and the chart topping “House of The Rising Sun.” But none of those songs are on the latest compilation. When the band re-emerged with a new lineup as Eric Burdon and The Animals, the group’s music became 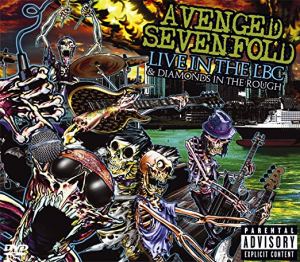 psychedelic, yet remained approachable. The forthcoming MGM Recordings contains favorites like “Monterey,” “Sky Pilot” and “San Franciscan Nights,” reflections of Burdon’s trippy California influence. All of Burdon and The Animals’ albums from the MGM years are here. According to the liner notes the wrinkle is these tracks were “Remastered from recently located original master tapes.” In essence, there is no new material.

Repackaged music from major acts goes beyond the 1960s. Bruce Springsteen and Dio have new old stock coming out during the next three months. On Feb. 7, 2020 digital and vinyl editions of Avenged Sevenfold’s 2008 Live At The LBC/Diamonds In The Rough bundle will hit music outlets. For some, the phrase déjà vu may come to mind, or maybe Groundhog’s Day.