Remaining focused on personally important matters can be challenging to say the least during such tumultuous times. Despite the overwhelming circumstances, hitting play can be a step in the right direction. Besides, getting centered for the moment may be only a song away. Tapping into a bit of original music that cranks with six string vitality and vocals, might just be the answer. Enter Kozmik Landing and the single “Fall.”

Better than a Red Bull or a triple espresso, there is something comforting and accessible about a rocked out song driven by drums, bass, guitar and vocals. The arrangement is classic. Add Kozmik Landing into the mix and the effect becomes super-energized, evidenced by the video for “Fall.” Published May 30, 2020 on Youtube, there is no doubt Kozmik Landing has absorbed the influences of Led Zeppelin, Janis Joplin, Wolfmother, Alanis Morissette and others. Yet, the Adelaide, South Australia-based band has developed its own sonic impression.

At the start the video for “Fall,” skydivers briefly file out of a plane one-by-one, letting viewers know something high

impact is on the way. Before long, the drummer and bassist set the rhythm as the guitarist lays down some tasty-toned fills below the 12th fret. Listen closely as the bassline moves with punchiness and accuracy. To borrow a phrase, all of this sets the stage for the singer’s entrance. While the instrumentation is tops, the lead singer renders the band apart with memorable distinction beginning at :21 seconds into the 5:46 track. 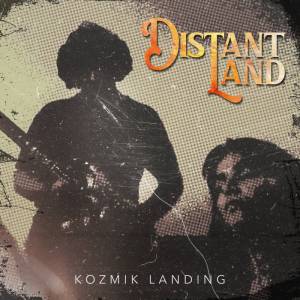 Kozmik Landing is actually a duo of musicians and songwriters Robert and Vena Cartledge. The band lineup for “Fall” includes guitarist and keyboardist Robert Cartledge and lead vocalist Vena Cartledge, joined by drummer Neil Williams and bassist Anthony Ciccarello. The band is a duo, but the meshing together of forces in the video comes across as undeniably and naturally amped. No wonder “Fall” explodes with presence. As a unit, the phrase well-oiled comes to mind. In some respects this is no coincidence, considering years ago Williams was also the drummer in Robert Cartledge’s first band.

For aficionados who enjoy Kozmik Landing’s message and amperage, check out the band’s debut album Distant Land, a seven-song collection released in December 2019. The title cut is interesting and alluring by way of a striking melody, expert musicianship and a compelling performance. No kidding. As far as indie projects go, the track “Distant Land” is one of the best. The syncopated rhythm alone is entrancing. Distant Land the album also exhibits punkish and even metal tendencies. “Woe To Me” is another great new song video on Facebook. For these reasons and more, Kozmik Landing is a recommended pick.