She is a founding member and lead guitarist for one of the hottest bands in the country. Whether it’s session work or a live show, her punk-metal solos typically sear with unrelenting passion. To say she is reckless, coarse and unpredictable would be a drastic understatement. She is the incomparable Rachel Rekkit.

Rachel Rekkit and the CrashDollz have been pulling out all the stops lately. The band just inked a deal with Radiclea Records, which is distributed through CEN, RED and entertainment giant Sony. Add to that, the group has been endorsed and sponsored by Metal Babe Mayhem Clothing in Hollywood. The Dollz also have begun work on a new album scheduled for release by the end of the summer.

CrashDollz are Rachel Rekkit-guitar; Nikki Darling-lead vocals; Kevin Krank-bass; and Mikk Manikk-drums. Together, the Detroit-based band is a rising force to be reckoned with. They have built a solid following with original songs, including “Novocaine,” “Dumpster Punk” and “DollHouse.” Get ready for the CrashDollz, if you can take it, because they have a new album on the way.

Musicinterviewmagazine.com recently spoke with Rachel Rekkit. She talked about the CrashDollz upcoming album, creative inspirations, guitars, her views on feminism and much more.

Wow, you and the band have been busy. Congratulations on the new deal with Radiclea Records. Can you tell us how that came about?

We were kind of shopping the band around to different companies. We had about four that were interested. We negotiated with all four for about a month, but the distribution capabilities of Radiclea Records, through CEN, RED and Sony was a huge plus. That particular record company has a lot of experience with placement in television, video games and things like that. They’re very market driven and we’ve always said our band is very marketable. So is our music. To have a company that has a lot of experience and connections sealed it for us. They’re 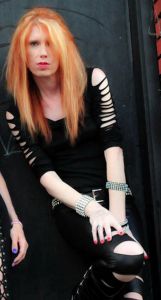 [Radiclea] out of New Jersey. One of the big plusses about the new album is that it will be mastered in New York at Masterdisk, by the guy who did some Slayer records and the White Stripes and stuff like that. The mastering is going to be phenomenal. That’s really to match Sony standards.

The new album is going to be recorded at Ape Studios in Ohio over the summer, with an anticipated release date of Aug. 2015. Talk a little about some of the tracks. Will they all be new songs?

The last album came out in 2013, so we’ve had two years to prep for this record. It’s been important to us that we surpass the watermark of the first album. The songwriting on the first album was unique and interesting. There have been a lot of songs that have been tossed because they just weren’t up to standards. We probably could have three albums out by now if we weren’t going to be really particular about it. But we did spend the time it took to create a full length record that I believe surpasses the first album on most every level. The title of the new album will be Punks in America, which is a song. It’s kind of like our anthem and probably the most punk song we’ve ever done. This band does a lot of different hybrid-type sounds but that one is almost a direct punk song. Nikki and I are glad to have something in there that we can bounce to and have fun with. We’ve played it live a few times, it’s extremely heavy. It has to have one of the snarliest guitar riffs ever written. Another new one is “HellCat.” We’re real proud of that as well. I’ll mention one more new one that we performed acoustically last weekend. It’s called “F-ck Me Nation.” That’s kind of a left turn for us but it’s another anthem.

Who will produce the album? Have you worked with the producer before?

The album will be produced by our label head, Scott Lea. He owns Radiclea Records. It will be produced at Scott Lea Production Studio in New Jersey. But it will also be engineered by Randy Wilson. He did Damien, a Toledo band. Ours is kind of going to be a three-way production. It will be engineered by Randy Wilson, produced by the three of us and then mastered out of Masterdisk. This will be our first time working with this producer.

The CrashDollz have been endorsed by Metal Babe Mayhem Clothing in Hollywood.You’re certainly gaining steam. As the lead guitarist and co-founding member, what inspired you to create the band?

When I met Nikki, my expectations were not to start a rock and roll revolution. I just wanted to find a similar-minded girl who wanted to make some punk rock music with me. It was something that happened with us. I’ve talked about this before. She’s played with a lot of musicians before and I’ve played with a lot of musicians before. But neither one of us felt what we felt before we started playing music together. There was something there. I believe in chemistry. You can’t predict it. It either happens or it doesn’t. That’s what happened with Nikki. It was kind of magical. Our sounds came together in a way that was truly unique. As far as creating the band, after writing some songs and creating a bit of a blueprint for what we wanted to do, it all just started to fall into place, the name, the look. Then we had to really talk about how to empower women with what we were doing, without having to stand there covered up and doing the whole feminist thing about not showing you my body because that’s objectification. Rather, we did a double reverse on that. We look the way that we look, but we’re going to rock you so hard you’ll forget what we’re wearing.

We have to ask, how did you initially meet up with the other band members?

Nikki and I met through a Craigslist ad. Our bass player, Kevin, was referred to us. He’s a kind of a legend, a celebrity in Ohio. He’s played with David Chastain and he has been the bass player for Damien. We found Mikk through an ad.

The CrashDollz are based in Detroit. Why is it such a hub for important music?

That’s a great question. I think a lot of rock journalists have been musing over that for decades. I don’t have an answer. But being someone who has lived on Eight Mile for 20 years, I do know Detroit. I know the streets of Detroit. When I write a song, it sounds like a Detroit band right out of the gate. Everybody in the band brings that to the table. When Detroit comes up with something fresh and exciting it’s usually truly fresh and new. It typically scares the hell out of people who don’t like it or get it because it’s too new. Even The White Stripes got a bit of a backlash at first. You know, to me, Iggy Pop, Alice Cooper, MC5, they scared people. We’ve been together for five years and we scare people. Our fan base has been growing because people are starting to get it.

Live and in the studio, visually and sonically, the CrashDollz are a compelling band to experience. All of your songs explode with sound. For instance, “DollHouse” is great from the studio, at concerts and even acoustically. The show last June, when the CrashDollz opened for Jello Biafra, your guitar absolutely screamed. What kind of guitar did you use?

I only play one guitar. It’s a vintage Guild X79 that’s been heavily modified. It’s from about 1981. They’re very rare. I run that through a vintage Marshall JCM-800 that’s slightly modified. On “DollHouse” I use a little bit of a custom effects pedal that’s on a pedalboard where I just created the preset. I get an outrageous amount of controlled feedback that I can pull between the Guild and the Marshall. For “DollHouse” I really try to utilize that especially in the solo section. On the studio version, there is an overhang that goes 16 measures past the vocal where I’m just coasting on these unearthly and ghostly controlled feedback tones. I had my Marshall in a shed at the studio locked up and everything was turned to ten. The whole neighborhood could hear us. I just let these moans come out. It sounded so cool. You can hear it in the studio version; it’s in the mix. The guitar has a very specific sound. It has a specific look and plays differently than other guitars. It’s the only guitar I play. Actually, I have two but that’s the white one.

What kind of pickups are on the Guild?

I heavily modified it and pulled the originals out. I use an EMG 81 in the neck position. The bridge position has been disconnected so the toggle switch is the kill. I have a Kahler in there because oddly, looking at it, you’d think it had a tremolo when they were made, but it didn’t. So, I had the Kahler installed.

Do you always use a pick?

What about drop or open tunings?

gives us the ability, both in the bass and the guitar, to bounce between the D and E. The root note is E, but we’re able to bounce down to the D which gives it more depth.

Will the CrashDollz be playing anywhere this summer?

Yes, we’re anticipating the CD release around the end of August. We’ll be doing release parties in New Jersey, Michigan and Ohio. We’re doing other shows in September and intend to put together a national tour at some point.

What are the long term plans for you and the CrashDollz?

We believe this band has the ability to turn the industry on its ear. I honestly believe that rock music, in particular, has become watered down with a lot of repetition of formulas that have been considered successful. I don’t hear many bands or things on the radio that are unique. I think we have a fresh sound. Every once in a while Detroit bubbles up with something that’s new, like The White Stripes, Iggy Pop, Alice Cooper or MC5. We’re the latest one. I’m looking at longevity. I think this band has a career in front of us, so let’s take it as far as we can. I want to be on Jimmy Fallon and pushing him over. I want to bring it to mainstream America. I think it’s going to kick them in the teeth when CrashDollz get to Main Street.