Classic Guitar Pedals: The Ones That Work And Why

With the holiday season approaching, look for a slew of great guitar gear featuring consumer friendly price tags. Before the next National Association of Music Merchants trade show, also known as Winter NAMM 2017, pickers, strummers and mean-ass axe-slingers should not forget about the equipment already on the retail market that remain tried and true favorites. Here are three stomp box guitar pedals that still live up to expectation and then some. 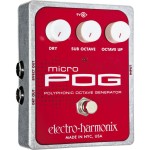 The electro-harmonix® Micro Pog ® is a polyphonic octave generator that provides sub octave and octave up tones by merely plugging in and stepping on a foot switch. This is part of how Jack White created the growling rumble bass intro for “Seven Nation Army.” The Micro Pog® can easily turn a regular electric six-string into a bass guitar, which comes in handy when jamming out to the Muddy Waters’ classic “Deep Down In Florida, where Bob Margolin doubled on the bass lines with his Tele. What’s more, the Pog® can also recreate the sounds of an organ, ala Deep Purple’s Jon Lord. No batteries here, only AC power. At around $213.00, the Micro Pog’s® versatility is not cheap, but well worth the price. Generally speaking, you can give it thumbs up.

Dunlop’s® Jimi Hendrix Fuzz Face pedal cuts an amazingly simple path to psychedelia and fun, especially when using a semi-hollow body fitted with the right humbuckers, preferably a Seymour Duncan 59 P.A.F. pickup at the neck and a JB Trembucker for the bridge. With the right amp and the fuzz and volume turned down a bit, the FF resembles a vintage Fender® silver face. This is Dunlop’s JH-F1 model, not the mini. The pedal runs on a 9v battery and uses silicon transistors, which go especially well with single coils. Think of Jimi’s Electric Ladyland. The retail price for the Jimi Hendrix Fuzz Face pedal is about $150.00 or so. Not too much by today’s standards, especially when you consider its proven abilities.

The Boss DS-1® distortion stomp box has been a staple of heavy metal fretsters since the product debuted in 1978. Everything from Metallica to Nirvana can be coaxed out of this little orange box. Equipped with tone, level and distortion controls, the results can be slightly brittle yet powerfully sonic. It was good enough for Joe Walsh. Though the only thing constant in life is change, you can always count on the Boss DS-1 for a quality effect. Either a typical 9v battery works or DC power can be used. Always check the specifications of the power source before using. Retailing at about $50.00, the DS-1 is a bargain. Go for it.