The Elk Minister: 26 Albums in a Year?

A creation of the imagination – revealed in sound – characterizes the work of Colorado-based indie musician Elk Minister. After receiving a message from the netherworld, the prolific Elk has vowed to release more than two dozen studio albums over the next fifty-two weeks. The conscientious project, titled The Book of Slaw: Songs From My Great Aunt Coleslaw, is fueled by reality as well as fantasy. But there is more to this unusual music story.

The Elk Minister will release an album once every two weeks in 2018, which the artist has named “The Year of The Elk.” The schedule of new music for The Book of Slaw: Songs From My Aunt Coleslaw, a relative who “now resides in a different plane of existence in the year 3144 A.D.,” follows a 28 day, 13 month calendar, based on all 13 zodiac signs. The timetable of tuneage can be downloaded  free and the first album, Capricorn, is out now. We listened on Bandcamp.

For anyone having doubts about The Book of Slaw, you had better think again. The Elk Minister is up for the task and more. A multi-instrumentalist, EM plays a Steinway piano, electric bass, upright bass, electric guitar, 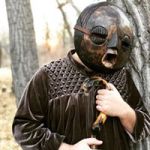 The opening cut from Capricorn, “Everything is Make Believe,” has a progressive, experimental quality always flowing at a controlled even pace. The Minister’s restrained multi-tracked vocals compliment the piano playing in a way that sounds spacey but with a hypnotic Beatles “Blue Jay Way”-Harry Nilsson appeal, which also describes most of the album. A subtle drum beat with light riffing on the cymbals adds dimension to the 3:07 track. The lyrics “worldwide illusion, my faith is your delusion,” ring with a certain resonance and fascination.

“Red Pistachio” rocks with a steady smashing beat, while almost rap-like vocals hang on the precipice of an exotic quarter tone melody. No question Elk Minister’s singer-songwriting capabilities shine through from an extraordinary place in the universe. Perhaps just as interesting is the antlered one’s imaginary friend Gerald, who “translated and transcribed” “Red Pistachio,” as well as the other cuts. In case you were wondering, the concept behind the songs came about after the Elk had a visit from the spirit of his late Aunt Coleslaw.

Another highlight, “Synthetic Human,” lives up to the title with a distorted robotic delivery. Though the tone does not sound like typical auto tuning, the mechanical message is perfectly clear as the song churns and cycles in a droning wave of atmosphere and coldness. The remaining tracks, “The Over/Under Waltz,” “Dramatic Tendencies”

and “Theoretical Darkness,” are instrumental piano pieces showcasing the talent and mind’s eye of a solo artist. EM is a bit more piano-driven on Great Aunt Slaw than compared to 2017’s There’s A System Of Control.

Elk also has released The Book of Slaw: Songs from My Great Aunt Coleslaw (Chapter I) as a separate 24:51 one-track, spoken word recording and a recent video for “Everything Is Make Believe,” featuring an odd robed figure in a mask.

Other titles include “Empty Eyes,” “You Can Be Two People” and “Into the Void of Emptiness.”

In order to contact Elk Minister, address your email to Gerald at Elkminister@gmail.com and include the subject.