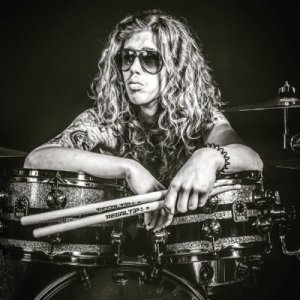 Razor sharp timing, an extensive vocabulary of ideas and limitless drive separates musician Kyle Hughes from the rest. Hughes, a drummer who has played with Bumblefoot, Aurora Dawn and the Screaming Skulls, among others, knows when to hold back, focusing on what is best for the music. As a session and concert professional, the ear-catching beats, crossovers, twirling sticks, grooves, agile independence and technique are all there. But this is just the beginning of the story.

After listening to “Of Wolves,” from deathcore metalists Misanthropy’s EP Foot of the Mountain, you can hear how Kyle Hughes’s chops go beyond merely maintaining beats within a time measure and anchoring a song that cranks. Available as a 320 kbps download, buckle up for this this ride. Hughes is the glue holding things together, never overtaking the band’s outstanding seven-string guitar work, bass and vocals. What’s more, the production of the drum layer throughout the recording

From Avenged Sevenfold’s “Nightmare” to Jason Aldean’s “She’s Country,” Hughes also is a master of drum covers. Proof can be seen on YouTube. Another favorite is KH’s cover of Bring Me the Horizon’s “Can You Feel My Heart.” As for live shows, he is currently traveling in Europe alongside bassist Pedro Mendoza and guitar shredder Mickey Crystal on the Viva La Rock Tour. “Viva La Rock” is the title track from Mendoza’s new album.

Hughes’s prowess on the drums is undeniable, including his performances with former Guns N’ Roses axe slinger Ron “Bumblefoot” Thal. Check out the video footage from New York’s Iridium. Clearly, a higher degree of skill is required to play with Bumblefoot and Hughes aptly fits the bill. Musicinterviewmagazine caught up with Kyle Hughes on the eve of the Viva La Rock Tour.

An Interview with Kyle Hughes

Congratulations on the Viva La Rock Tour with Marco Mendoza. From watching your work on different videos and in concert, is it safe to assume you generally prefer a single bass drum? But do you use a single or double kick pedal?

Thank you. It’s an honour to be involved in the tour with Marco and my pal Micky Crystal, both monster players. As for my kick drum, yes, I use one kick drum but with the double pedal attached, which allows me to play all that tech metal stuff.

How would you describe your approach to the drums? How about your kit?

My approach in playing the drums and especially being a session player is to have the chops, but to play for the music. As much as you want to show off and express your lick of the day, it’s really important to play what the artist wants and makes them feel comfortable. The approach really is to play what’s needed, as there will always be a time where you can show. Groove is key.

My current drum kit is from the Natal Birch Series. They sound great and in my opinion is the best kit I’ve played.

What brand of drums and cymbals do you use? What size drumsticks?

I play and endorse Natal Drums; Regal Tip Drumsticks®; and Istanbul Mehmet Cymbals®. I’ve been with Istanbul Mehmet since I was 15 years old and over the last few months have gotten heavily involved with both Natal Drums and Regal Tip. I’m very proud to be a part of both rosters. I’d like to add that I endorse Czarcie Kopyto pedals®, which are made in Poland and also Aquarian® Drumheads. They’re all very kind.

Though we have our favorites, which music videos do you think best represent your style?

Of the videos I’ve released on my channel and the ones that just feature me, the “Abnormal – Bumblefoot Drum Cover” shows off my style along with a video from Misanthropy called “Of Wolves.” In all honesty, I really enjoy playing metal and rock because that’s what I grew up with, so these videos represent my style quite well. Though recently, I’ve been laying off the metal for the Viva La Rock Tour. Whatever style it is, I adapt and respect that style.

Another video is from my old band and me performing with Bumblefoot for the first time. I was 17 and we had zero rehearsals with Bumblefoot [Ron] before we met him. This video shows our hard work and in all fairness, since then, I’ve played a few shows with Ron-good times.

We have to ask, who influenced you as a drummer?

There are so many drummers today who influence me, but growing up the top three were Lars Ulrich, Joey Jordison and Mike Portnoy. After watching those guys play live it made me want to practice even more, to a point where that’s all I lived for. The routine was wake up, practice, practice, practice, sleep and repeat. The routine was pretty intense, but in order to get to that kind of level you’ve got to dedicate everything to it. So that’s exactly what I did.