Singer-songwriter Darbi Shaun is in a good place following the release of the contemporary country artist’s album, 4AM. Now, with newly hired manager Vicky Hamilton organizing the professional affairs, Shaun, who’s first performance of original material was at Nashville’s famous Blue Bird Café music club, has several shows lined up for the summer months, including a five-date tour in Nashville, Jun. 9-14. As usual, there is more to the story.

Musicinterviewmagazine.com spoke with Darbi Shaun about the singer and Texas A&M University graduate’s album 4AM, Nashville, the song “Stars” and much more.

You grew up in Houston and recently moved to Nashville, Tennessee. How has that been?

My thoughts on the Nashville move are that it’s definitely a scary step into something unknown and out of my comfort zone, but I’m really excited for a new beginning and new opportunities. Right now, I have been trying to focus on writing, so hopefully there will be some new music in the not too distant future.

Tell us about your album 4AM.

This is definitely the project I’m most proud of. The 4AM collection is made up of seven songs which I wrote over the course of four years; they all have differing, but equally important, messages. From the time I first picked up a guitar, it’s been my favorite thing to do and something that helps express my emotions, in a creative way. My music is definitely closely related to my life, because most of the time, that’s what I’m writing about. I try my best to be open and honest in my writing about personal experiences.

The song “Stars” carries an important message for everyone. What was the inspiration? 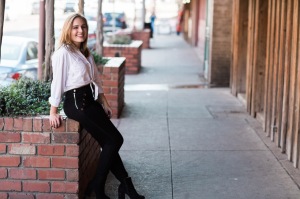 “Stars” is by far the most emotional song on the album. It deals with suicide. This is incredibly close to my heart, because I have struggled with my own mental health battles and am a big advocate for erasing the mental illness stigma. I hope that it offers some form of comfort to anyone who has lost someone to such tragic circumstances.

Can you talk about some of your fondest early music experiences?

I started my music career as a four-year-old professional Shania Twain impersonator, in front of the TV. Then, I began singing in the church choir during third grade and that’s when I first sang into a microphone in front of other people. From that point on, I did talent shows and choir in school. Soon I picked up a guitar and began writing at 13. I started to really get serious about music at the end of freshman year of high school. I started playing any shows I could get and I’ve been building on that ever since.

How did the performance at The Blue Bird Café come about?

That was the first time I played guitar on stage and sang an original song in public. My mom was so nervous that I’m not always in the video she took that night because she was shaking the camera so much. It turned out to be a great night and it gave me the confidence to keep writing and playing. 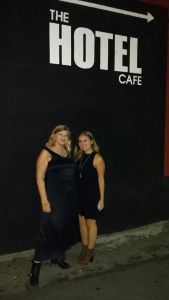 How did you meet your manager Vicky Hamilton?

I first met Vicky a few years ago at the Springboard Music Festival in Houston. I already knew who she was and thought she was the coolest human being ever before that day, so I couldn’t wait to meet her. Since then she’s constantly supported me and being officially signed with her is a dream.

Vicky Hamilton is noted for managing the early careers of Guns N’ Roses and Poison and working with several other notable rock bands.