The latest offering from power metal titans Serious Black takes listeners for a dark musical ride. Suite 226, now available globally via AFM Records, is the group’s fifth studio album and has all the makings of a compelling psychological drama. Many of the songs revolve around a man’s mental health while being held in a titular cell and unable to differentiate between reality and fiction.

In the man’s imagination, he is a king, whereas in reality, the character’s been subject to psychiatric tests and drugs for years. The accompanying maelstrom of madness is conveyed through songs with fierceness and energy which temper the weight of the lyrical themes. Check out the first single, “When The Stars Are Right,” for an indication of the band’s ability to tell a story through a melodic heaviness and a catchy chorus.

Comprised of past and current members from notable metal bands, Serious Black is heralded by fans and critics as a supergroup. Singer Urban Breed, formerly of Tad Morose, has all the range needed for power metal. He also demonstrates an ability to emote the sadness of the protagonist’s madness, like in “Fate of All Humanity,” one of the more straight-ahead rockers, further setting him aside from other banshees of the genre. Guitarist Dominik 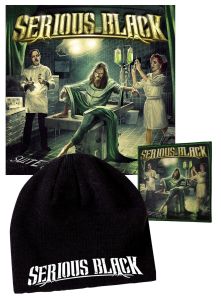 Sebastian, concurrently a member of Edenbridge, among others, plays with a technical proficiency which allows the other Serious members to shine. The rhythm section of co-founder and bassist Mario Lochert (Visions of Atlantis) and Ramy Ali handle tempos with care and are not chugging along in E-flat, while blast-beating the listener into oblivion.

Amid Serious Black’s current run of shows supporting HammerFall in Europe, muicinterviewmagazine.com spoke with guitarist Sebastian to discuss the themes of Suite 226, the state of power metal and how he remains true to his roots as a local musician despite having toured the world.

Musicinterviewmagazine.com: How does having at least one less member than many of your peers and two less from when you started, create or reduce challenges in writing and performing melodic/power metal?

Dominik Sebastian: Too many chefs would kill the soup. Less people who want to bring themselves into a product means fewer fights, mostly. But if you‘re stuck somehow with the writing process there is always the possibility to ask for help.

What is Serious Black’s songwriting process?

ones. Sometimes there might be completed songs that fit the band’s sound. The lyrics are then done by Urban on top.

What do you believe makes a memorable power metal song?

I think it should have at least a chorus that everyone can sing along more or less immediately. Melody and lyrics shouldn’t be too complicated, I would say, but if it only was that easy.

What sort of pressure is there to carry on a band co-conceived by a seasoned metal veteran like Roland Grapow following his departure? What is Serious Black’s relationship with him today?

Absolutely no pressure at all. Roland played most of the guitar stuff on our first record and we did a video together, that’s all. The building up of the band was then done with other musicians, as you know. The relationship with him [Grapow] is good, but not very close. He visits us now and then when we‘re playing near his home and he’s got time.

Who is handling keyboard duties on Suite 226?

We got Jonah Weingarten of Pyramaze for the keys and orchestral stuff, based on our own ideas.

Suite 226 has songs about someone unable to distinguish between fantasy and reality and touches on mental health issues. Would you say this is a concept album and how does it differ from past efforts?

Magic, from 2017, was a concept album, telling a story throughout the whole record. Suite 226 is not a concept album. The theme about mental illness and psychological experiments shows up in some songs, and of course in the video for “When The Stars Are Right.” But there are songs, too, that have nothing to do with it.

Do your fans expect concepts? 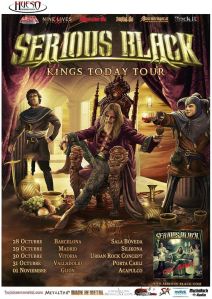 I’m not sure if they always would expect concepts from us. And as I can‘t say what the next one would be like, they might better expect another piece of great music instead of a storyline.

What lessons were learned as local musicians that you continue to be mindful of?

You might learn some basics about what it is in the music business as a local musician. But in real life you’ll only get to know by being on the road. And many of them are not made for touring. But I would recommend everyone try it if they had the chance to tour one time. I love it, although it‘s often a really tough life.

How does being the supporting band for HammerFall keep you in touch with your roots as a local musician?

Being on tour with big bands and big productions is great for the length of the tour. But then, back home, real life hits you and you are the local musician, again playing club shows and doing some other work to earn money. You go on tour to raise your own fan base, hoping to reach the next level for your own band. Never forget your roots. Enjoy the moment.

For more about Serious Black: