Tom and Frank might be Norway’s best kept secret these days. After watching just one of their music videos, you likely will agree that situation is bound to change. Steeped in classic rock, Tom and Frank bring an acoustic metal vibe to their cover songs, yielding compelling results. Check out the duo’s version of The Kinks’ legendary smash “You Really Got Me.” The treatment is quite different from Van Halen’s rendition, but no less effective. Keeping that in mind, Tom and Frank’s approach is simple and direct while definitely kicking some ass.

With a snarling vocal edginess and some strong fretwork, Tom and Frank’s rendition of AC/DC’s “Night Prowler” is gripping and raw. The same holds true for their interpretation of “Hate To Say I Told You So,” à la The Hives. What’s more, the production quality of the songs and videos is surprisingly good. Yes, that is a cigar box guitar you hear every now and then. Told you they had modest methods, in the Velvet Underground sense. 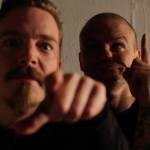 Perhaps the most interesting track in the band’s repertoire is the cover of Creedence Clearwater Revival’s “Fortunate Son.” Deliberate, dramatic and contemporary, the guys deliver an exciting performance without any reference to John Fogarty’s way of doing things. This is just more proof that Tom and Frank are onto something that should not be missed. Songs are available on Spotify, but soon-to-be enthusiasts can also watch on YouTube and Facebook. Do yourself a favor and check out Tom and Frank.