With the title track dedicated to lives lost and still-recovering survivors of the tragic Sedgefield-Knysna-Plettenberg bay area wildfires during June 2017, South African singer-songwriter-pianist Chantal evokes both personal losses and heartfelt compassion in her craft. However, she states, “Although the concept of ‘Scars’ came out of something horrific, the song itself is not negative. Having scars implies recovery, strength and healing, what the song is ultimately about and that we find the inner strength to go on even when at times we may want to give up.”

The album Scars, a compilation of 13 new songs, all written by Chantal, was officially released May 5, 2018 on the Mondo Tunes label. Produced, engineered, mixed and mastered by Jo Ellis at Blue Room Studios, Ladismith, Western Cape, South Africa, with Christian Burgess serving as assistant engineer, Chantal is backed by session musicians on the album. Of particular note are two of her mentors, Godfrey Johnson and Nicholas McDiarmid, providing backing vocals, with Nicholas also playing piano, on the track “Burn.”

Another standout cut is “Children of War,” Chantal’s response to watching children scattering in the streets as bombs hit their Middle Eastern town. Intensely moved, she “burst into tears and wrote the song shortly thereafter as a plea, a call to action and my protest song.”

To learn more about what motivated the album and Chantal, her Taoist philosophy and upcoming plans, read the recent interview at MusicInterviewMagazine.com. Scars is available from more than 600 digital music stores worldwide, including Amazon and iTunes. Visit Chantal on the web at www.chantalsmusic.com. 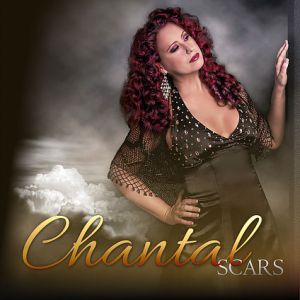