David Reece is all about the journey. The musician’s beginnings trace back to Minnesota, where after stints with local rock groups, he successfully auditioned in 1989 to be the new singer for German metal legends Accept. Though a one-time role, connecting with Accept provided exposure to other groups and projects, particularly overseas and in Europe, where the vocalist has had his greatest music successes.

Between solo albums and tenures with groups including Bonfire, Bangalore Choir, Tango Down and more recently Sainted Sinners, Reece’s resume cites dozens of releases and at least one studio album for every year this decade.

But Reece’s newest release, Resilient Heart, to be issued by the singer’s solo outfit, REECE through Mighty Music on Nov. 9, is a standout in the frontman’s portfolio. Resilient Heart’s title, a nod to having longevity in the rock scene, focuses on the strengths of his unique, melodic metal vocals. Nearly 60, Reece can get dark without resorting to a full-on growl and can still wail without overpowering listeners or the band. Additionally, the album’s 11 songs largely reflect a positive yet pragmatic outlook. “Karma,” “Two Coins and a Dead Man” and “Wicked City Blues” have uptempo metal accurately pegged, with guitar-led

harmonies and catchy choruses. “I Don’t Know Why” demonstrates Reece’s strength as a lyricist tackling themes of regret in lighter, slower doses before launching into a thunderstorm of a chorus, shouting: “I don’t know why I keep holding on to the past, I don’t know why I lost my grip on the things that just don’t last.”

For Resilient Heart, Reece teams up with a quartet of Danish rockers, including guitarists Marco Angioni and Martin J. Andersen of the band Meridan; bassist Malte Frederik Burkert; and drummer Sigurd J. Jensen, providing the right balance of melodic strength and metal which best enable the music.

An Interview with David Reece

Always willing to connect with each international fan base, Reece spoke with musicinterviewmagazine.com about Resilient Heart, vocal training and care, thoughts on how the gig economy has an impact on music performers, where the musical journey will lead to next and more.

Hi David, it’s great to talk with you.

David Reece: Hello, nice to speak with you and your readers.

Resilient Heart is a straightforward rock-metal album. Is your approach to the music an effort to stand out among your other works? 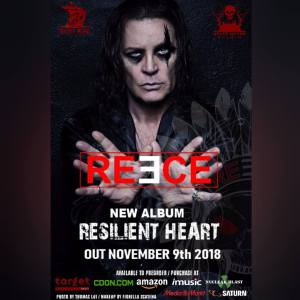 I started writing ideas for Resilient Heart in 2015, because I was growing weary of pop-rock, like Bonfire, which I was in at the time. I’ve also grown tired of album-oriented rock music as a whole, because nobody, including myself, seemed to be doing anything outside the comfort box. With this album, I made a conscious effort to stay outside of the norms and do something more me.

Lyrically, Resilient Heart has elements of wisdom and is complemented with a lot of energy and ferocity in the music. Were the songs always constructed that way, or did they evolve in the studio with the band?

Thank you about the lyric comment. As a lyricist I have never been a baby-baby, whoa-whoa guy. I’ve written a few songs with clichés, but I try to write stories about what I see going on around me and in my head and heart. I wanted a fresh sound. So, when I began writing, the first two songs that seemed to be fresh were “Karma” and “Two Coins.” When I met with Marco Angioni and Martin Jepsen Andersen, I knew it was a template of direction, which they grasped beautifully.

“I Don’t Know Why” is an album highlight. The song deals with regret and reconciling a past and is a strong spin on a topic we’ve heard before from other artists. How did that song come about and evolve?

For me, I’m always asking why and sometimes find myself making amends for things I’ve said and done. Again, it seems some writers see a title and write a lyric to it, where for me, it’s always going to be my take on personal life

What sort of vocal training do you have? How did you bring that into the making of Resilient Heart?

I’ve had lots of vocal training in my life and the best way to sum me up as a singer is I’m never fully satisfied. I always strive to improve. Being able to scream or sing high notes doesn’t make a singer. Being a singer is 99 percent attitude. What separates the puppies from the dogs is a real commitment to your craft.

I rehearse daily. Another vital detail is sleep, especially while touring. I’ve stopped drinking for some time now and look and sing better as a result. I think alcohol gives you a false sense of quality. Experience is also vital, doing lots of shows and learning your strengths and limitations. There are a lot of so-called singers following the bouncing ball while making albums and I think fans can really sense that.

You’re involved with several projects. Would you say that for many professional rock musicians it’s necessary to have followed that path in order to fulfill a certain level of achievement? How might Resilient Heart be a commentary on the gig economy?

I’ve done a few projects and been someone’s singer. To be honest, I’m tired of the hired gun thing. In today’s world, many singers do multiple projects to stay active and relevant, which I understand. But I’m narrowing down my scope and focusing more on Reece solo.

You were in your 20s when brought into the international rock scene as the singer for Accept and it was a tough position. How would you advise musicians when it comes to filling another’s shoes in a successful band or grappling with fulltime music at a young age?

I was 27 when I joined Accept. I think. And trying to replace someone who has had success with a group isn’t easy at all. My advice is to be yourself and don’t be afraid to speak your mind, because if they don’t want to hear it, they never really gave a shit about you or your opinion, anyway. Rehearse your craft and don’t be afraid to be yourself and put your stamp on the previous songs.

Do you listen to new music from bands you once played with? What are some that were strong outings?

Not much. I think Bonfire is boring, to be honest, just rehashed riffs over and over again. It was that way when I was in the band. I respect Accept because they continue strongly and have survived many lineup changes. I only listen to Reece Kronlund sometimes and Wicked Sensation. I did another album last year with Christian Tolle that’s very good, called Point Blank. There are many great artists on it.

What is your favorite song off Resilient Heart?

I’m in love with “Two Coins and a Dead Man” to be honest. But like I’ve said, I love the whole album, which for me is rare. An artist knows when their work is good while writing and recording and with Resilient Heart, even down to the artwork, it’s great. The players are great and most important, the songs are great.

Any plans to tour the U.S.?

Sorry, not right now. My shows are all Europe now but I’m constantly working to book U.S. dates, so one day I’ll be sure to bring the boys over. Until then, thank you for the interview and stay Resilient!