A striking high-tech vision of sight and sound, to say the portable GravaStar Bluetooth® 5.0 speaker from Zoeao creates a memorable impression would be an understatement. The three folding seismic crablike legs and multiple radiant green lights peeping out from behind a mesh covered oculus, covering a spherical sound diaphragm, look something like a sleek Sci-Fi device dispatched from the future.

With music pumping through a 2.76 inch 20 watt full-range 4ohm speaker, including an impressive bass driver, hearing the portable GravaStar 5.0 speaker truly is believing. Considering we glanced as much as listened, the

small sphere packs a powerful wallop of curiosity and pleasure. Available on indiegogo.com, this only begins to describe Zoeao’s GravaStar Bluetooth speaker.

Equipped with a potent Ti3118 amplifier chip, the GravaStar Bluetooth 5.0 speaker, which swiftly arrived fully charged, is packaged with a quick start user guide, USB Type-C charging cable and a 3.5mm stereo AUX-in cable for connecting by wire to different audio sources. First removed from the box, the GravaStar’s sturdy gray-black zinc-alloy shell conveyed an unassuming presence. Measuring 7.48 inches high, 7.87 inches wide with a 5.5 inch diameter, seeing the tremor proof tripodal legs up close only heightened our anticipation. This is when the fun really began. 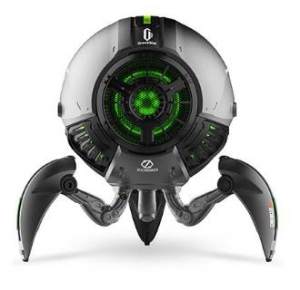 Once unpacked, we simply held down the middle button on top of the GravaStar to prompt the vocal confirmation and the atmospheric Alien-green LED lights, which lets the user know the power is on. The GravaStar was easily paired with an iPhone 7 by finding “GravaStar” in the phone’s Bluetooth listing. Another prompt confirmed connection. The GravaStar’s Kalimba DSP microcontroller offered excellent fidelity with a separation of sound. Focusing on ease of use, controls are limited to a play/pause button and a touch sensitive back lit volume slider. Halfway, the audio was big with added dimension. According to GravaStar, the 5.0 speaker “adopts Qualcomm’s Bluetooth® wireless audio codec, improving its signal-to-noise ratio to minimize background noise. The listener will hear the tiniest of details…”

Aesthetics aside, wireless efficiency exceeded expectations. The same held with wired connections. We

conveniently linked an Acer laptop via the provided cable to the input located underneath the GravaStar next to the charging port. The audio exploded with a noticeable difference. Even at a moderate volume, Youtube videos were richer and thicker, particularly bass heavy tunes. Generally speaking, vocals and drums sounded stronger and fuller thanks to the bass driver’s magnetic metal core. Meanwhile, CDs and streaming music sources delivered a similar warm experience. For musicians, when joined with the AUX-in cable, all 16 sampled drum patterns of a handheld Teenage Engineering Pocket Operator PO-12 registered loud and clear. Of course, the GravaStar is a gamer’s delight, as well. We found listening to metal also is killer on the GravaStar.

As far as mobility, the world is your oyster with the GravaStar Bluetooth speaker. Indoors and out, hard or soft surfaces, the unit’s three-pronged shock absorbent stability rests well on everything from a coffee table to a beach

blanket. What’s more, while weighing 3.53 lbs., we cranked the speaker to higher volumes without any resulting sound vibrations. Battery life is listed as 30 hours at 65% output. The estimated communication range is rated 65-70 feet. Speaking of range, we placed the iPhone on a livingroom couch in Bluetooth mode, dialed in a music video and walked to the kitchen, bathroom and bedroom with the GravaStar without interruption of audio quality. Additionally, one GravaStar can be connected to a second to create a True Wireless Stereo (TWS) effect.

Though available on indigogo.com, GravaStar’s portable speaker is already in production. In fact, GravaStar indicates the company chose Indiegogo.com in order to expedite shipping. GravaStar has become so popular that the company publishes a comic based on the distinctive speaker.

GravaStar’s Bluetooth 5.0 speaker can be purchased for $129. The expected retail debut price tag is $250.

All things considered, GravaStar’s portable speaker reveals an outstanding sound design coupled with the latest Bluetooth technology. For these reasons and more, the GravaStar Bluetooth 5.0 speaker is a recommended choice.