After listening to the songs and looking at the cover of the new album from Fiona Ross, enthusiasts will surely pick up on the 13-song collection’s autobiographical feel and personal touches. Meanwhile, Ross’s lyric phrasing, vocal register and arrangements deliver brilliant presence and form. Head of the British Academy of New Music for eight years, the London-based jazz singer’s distinction is heard throughout Fierce and Non-Compliant. Here is how.

On the Therapy Records label, Fierce and Non-Compliant’s title cut opens the album with a cool but driving pulse, while crisp brass fills provide an almost stop-time quality. At :05 into the track, Ross, who has a huge Instagram following, joins the mix and immediately begins reeling off original lyrics within a spotless musical texture, delivering impeccable jazz styling. The bold and rhythmic character of the drums, both cymbals and skins, enhance the spirited tenor. Add the dazzling horn work and the title track absolutely grooves. Combined with Ross’s “Fierce and Non-Compliant”

refrain, while anthemic and revealing, the music emerges as confidant and alive. At the 3:05 mark, Fiona reaches into another stratosphere as the recording morphs into a frenzied finale.

The second cut, “For My Dad,” recorded as a live vocal take, is honest, slow and tear filled as Ross asks, “Are you there, are you proud?” Listen closely, because a certain kind of warmth and emotion runs through the singer’s music catalogue, which may be best typified during “For My Dad.” Piano driven and quite personal, at 3:30, the singer releases chilling notes of sadness and vulnerability. Ross’s “For My Dad” is proof that precision can be a painful experience in more ways than one.

“Woke up This Morning So I Can’t Complain,” the third track, is upbeat and exudes musical complexity. The song’s title reveals a bit of the artist’s playful personality. By comparison, the bluer musings of “I Followed My Heart,” a duet with choreographer, award-winning dancer, director and former classmate Adam Cooper, along with  Kim Cypher’s saxophone, is no less inviting. A personal favorite from Fierce and Non-Compliant, for the touching “Don’t Say,” featuring world artist Snow Owl, Ross recorded the vocals in a castle. Snow Owl also appears on “I Don’t Want It.” “Socialising With Misery” is another jazz-blues number with Marco Piccioni on electric guitar.

Distinguished author, educator and jazz advocate Maxine Gordon, wife of Dexter Gordon, has written the sleeve notes. Other highlights from Fierce and Non-Compliant include “Use The Right Words” and “Doing My Thing.” But you will have to listen and decide which songs stand out among the nuances of Fiona Ross.

All songs on Fierce and Non-Compliant were written, arranged and produced by Fiona Ross. 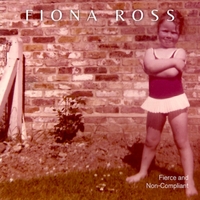 Engineered and recorded at Saige Studio by Gibbi Bettini; mixed at Highfield Studio by Warren Woodcraft and Elliot Richardson; mastered by Nick Watson at Fluid Mastering.

“Don’t Say” and “I Don’t Want It” were recorded, mixed and mastered by Snow Owl.

Find more about Fiona Ross on: