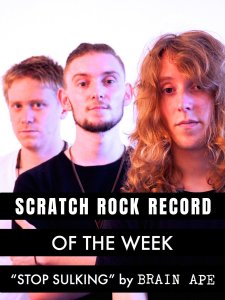 Sometimes angry and often ferocious but never silent, Brain Ape typically avoids conforming to dictated standards. The same impression holds true while watching the music video for “Stop Sulking,” the third and final single from the Auslander collection. But be forewarned, because Brain Ape is clearly in no mood to play. Plus, the straitjacket indicates something is humorously amiss. Nevertheless, the music of “Stop Sulking” is dead-on and fully Brain Ape.

The intro for the “Stop Sulking” video morphs from opaque imagery to visibility as the face of Brain Ape frontman and guitarist Minky Tres-Vain fills the screen. Right away, the lyrics “Why can’t you accept your roots/It’s not up to you” spells out the way Brain Ape delivers clever insubordination with a hammering blow, which the band does so well. Despite the appealing calmness of bassist Sol Alex Albret and drummer Jamie Steenbergen during the video, the trio’s music is biting and rhythmic. Listen closely for the time signature as the bass and drum work securely together. Meanwhile, the video is interspersed with scenes of Tres-Vain trying to break free from restraints.

The closing line from the press release for “Stop Sulking” suggests Brain Ape selling out, with the band’s souls traded to the highest bidder. In fact, there is a particular artistic integrity oozing from Brain Ape which remains priceless and not for sale, something band aficionados already know. Even so, “Stop Sulking” and other songs from Auslander lend to Brain Ape’s capacity for radio-friendliness. Available Nov. 13, 2019, “Stop Sulking” is on the Scratch Rock Records label, founded by friends Minky Tres-Vain and Dydy Haynes. Generally, the scratch concept promotes creativity through sharing and collaboration while remaining unique. In other words, Tres-Vain wanted to decide what music to make and produce, instead of being under someone else’s industry thumb.

Musicinterviewmagaine.com: During the video for the new single, “Stop Sulking,” you are wearing a straitjacket. What is the symbolism? Who shot and produced the video?

Minky Tres-Vain: The straightjacket imagery is playing off the lyrics, the surroundings in the shot and the footage of the whole band together. We created this video with the fantastic Nuri Moseinco and along with the rest of the band, we all sat down to brainstorm ideas for the video. The straightjacket came from that session and I think it meant something different to everyone at the table. It’s fraught with symbolism. But that’s always been the beauty of these things to us. It would be boring for me to create something on my own, for it to only have one side to its coin and then for me never to show it to anyone. Art is a collaborative effort between its creators and its audience. Neither should exist without the other and the effect of both working together is why we do what we do.

“Stop Sulking” will be the final single from Auslander, Brain Ape’s second album. Having a vantage point of working on both sides of the recording, does the Scratch Rock Records label make that decision, or the band?

Surprisingly, it’s a mixture of both. After years of running the label and battling with our inner artists, we’ve managed to split our personalities to better enable us to wear our producer hats when thinking of promotional strategies and then take them off so as to not cloud our artistic eye. But sometimes we can see through the hat and this was one of those instances. “Give Me My P45”gave us a fantastic beginning to Auslander and “Graphomania” gave us a fantastic second act. What would our story be without a finale? So artistically, it ticks that box. And as far as promotional material goes, the video is a nice offering that the band can create whilst they sulk away and work on what’s to come next from the trio.

Have you, Sol and Jamie begun working on the next release?

We’re not ones to confirm something that may not yet happen. It would be disingenuous and would set people up with expectations that may not be met. But we’ve always got our eye on the future. And for the first time since the release of Auslander, we’re excited for what we’re working on. One thing we can promise, though, is that you will not be able to predict where we take our project. It’s easy for people to use hindsight when looking at our progression, from Dara O’ to Auslander and assume that the lineage made perfect sense for the listener at the time, but the two are very different records. If we do indeed make a third album, it won’t be another Auslander. We don’t like repeating ourselves. If you want a third, fourth and fifth album, expect something different. If you don’t like different, you’ll always have Auslander.

“Stop Sulking” and Auslander generally marked somewhat of a shift to Brain Ape’s sound. Do you continue that idea at live shows?

We’re about to go on tour and we’re playing a lot of songs from our first album in this set. This will be the last time we play those tunes. Dara O’ came out five years ago and we’re too different a people for it to make sense for us to continue playing those tunes past this set of live dates. We’ll always hold the tracks close to our hearts and they are our roots as a band, but we’re not teenagers anymore and we’re not about to stagnate. But as we’ve grown with them and have continued to play those songs live, they’ve changed with us and therefore to those who aren’t as versed as we are in our material, I’m sure they are indistinguishable from the tracks we play from Auslander in the songs’ current form. But to us, they’re night and day.

Similar to perhaps a noise-rocking, Thurston Moore kind of alternative artistic integrity, can you speak a little about your guitar style? Do you prefer single coils or humbuckers? Do you use standard tuning and a pick? What about amplifiers and pedals?

I’m very flattered that you bring Moore’s name into a comparison with my own playing style, as he’s an idol of mine and certainly when we made Dara O’, was an immense influence in my development as a songwriter. In fact, to this day we still call certain sections of a few of our tracks the Sonic Youth bit. What he and Ranaldo do with their instruments is monumental. It’s one of the big reasons Sol uses a bow on his bass for a lot of our tunes. As for my personal set-up, in the studio I use a Fender Mustang guitar that I’ve shattered and bashed around on the road. Nothing plays like it. In fact, it plays better now that it’s been put back together. The reason for the Mustang is my less than imposing stature. The shorter scale fits me perfectly and playing is a breeze with it. I’ve not played a more comfortable guitar. My sweetheart currently has a stock single coil pickup at the neck position and a humbucker at the bridge. The bucker is very hot and therefore I tend to use it only for fully distorted tracks, although you can hear its clean tone during the intro of “Respect Your Icons.” Everything else goes through the neck single coil. I love that stock Fender clean tone and when passed through my EHX Big Muff it sounds exactly how I wanted it to for both Dara O’ and Auslander, which is warm, fully distorted and round. Cozy, really. All pumped through a Vox 100 Watt. The only other pedal I used on record is the EHX Small Clone. I used a Boss DS-1 on very, very early Brain Ape recordings, but I’m not the biggest of fan of its tone. The rest is very boring. Standard tuning, as every single Brain Ape tune has always been and I’ll play with any plectrum I can find. Usually they’re really worn out and not very nice to play with. “I Could Use Some Food,” from Auslander, is the only track not to have a pick in it.

Live, my pedals stay the same. I prefer using the Vox, but that’s not always possible. And then I have to pick and choose between the four guitars in my roster. The decision is usually dictated by which guitars are still in one piece from the night before. I’ve got a terribly expensive habit of playing up to the cliché set before me. Gear doesn’t always make it out of a show alive. You can see the other three guitars in my arsenal during the performance captured by our live DVD that came out last year. The Mustang didn’t make an appearance that night due to feeling poorly.

Brain Ape’s live shows have a reputation every so often for getting out of control. As the axe-wielding lead vocalist and frontman, often known to dive into the crowd, have you ever been injured during a show?

I’ve been incredibly lucky and never sustained a serious injury. Still counting my lucky stars, but I keep losing track and have to start again. Usually it’s the gear on stage that suffers and that’s always replaceable. I usually walk away from a show with a sore neck and sore throat, more often than I would like, with something bleeding. But it’s all part of the picture and I have no idea what I did to deserve such fortune. I’ll properly hurt myself one day and probably have to rethink things. I’m a bit of an idiot and won’t really affect change until I’m forced to.

Following “Stop Sulking,” what are yours and Brain Ape’s plans?

Keep your eyes peeled for next year. If all goes to plan, we’ll be doing something that we can be proud of. And if we’re not proud of it, you’ll never hear it. That’s the way it goes and while there’s still a sparkle in Sol’s eyes you can expect more from us.

Watch for the “Stop Sulking” Tour!

Paul Wolfle is the publisher of musicinterviewmagazine.com and a web-based journalist who has written for several popular sites. Paul has a passion for connecting with a diversity of musicians who are looking to grow a positive presence on the World Wide Web.