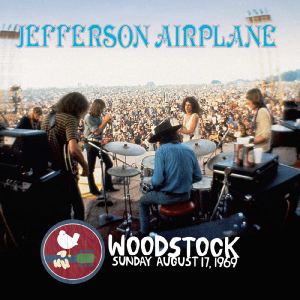 Judging by online retail outlets, the 50th anniversary 33 RPM 12 inch pressings of the Jefferson Airplane at Woodstock are typically easy to come by. But now, the Real Gone Records label has released a violet tinted LP containing the Airplane’s entire Woodstock performance. Oh yes and the grooved wax is supposed to vibrate while rotating on the turntable. Is this just another tie-died gimmick? Could be, but there is definitely a story behind the music.

With the benefit of hindsight and cutting edge technology, enthusiasts can reflect back upon important music events through a more realistic filter. Available Jan. 31, 2020, Woodstock Sunday August 17, 1969 Limited Violet 3xLP Edition captures the Jefferson Airplane’s live set, including the part where lead singer Grace Slick mentions “Morning maniac music,” the colors “green” and “orange”-presumed to be referencing LSD and how “Everybody’s vibrating.” In a quest to restore the psychedelic spirit of that precise moment, the three violet LPs will “vibrate” when played. That’s right. While the JA’s Woodstock 50th Anniversary New Dawn Blue Vinyl Edition has been out there since August 2019, the latest vibrating album is touted as something visually special. Vinyl aficionados and Airplane fans will have to decide for themselves.

Naturally, with the release of August 17, 1969, recorded over fifty years ago, questions arise as to why now? Despite the Jefferson Airplane being ambassadors from the Summer of Love, ushering in trippy yet chart topping songs and standing for youth and creativity, the liner notes on Amazon state, “They didn’t appear in the film due to subpar footage.” That might explain why Grace, Jorma, Jack and company did not have much face time in the

original film or soundtrack versus subsequently releasing six full audio sides. Today, the science of sound is a wonderful thing, making this collection happen. But similar recording gaffes were not uncommon during the classic rock era.

With well-known songs like “White Rabbit” and “Somebody To Love,” at the time, the Jefferson Airplane was a music influence right alongside The Byrds and Bob Dylan. Yet, the group was almost accidentally excerpted from the famous 1970 Woodstock film documentary, at least according to the violet LP’s liner notes. In a similar segue, Muddy Waters’ appearance during Martin Scorsese’s 1978 concert film The Last Waltz comes to mind. Waters, who singlehandedly provided the groundwork for much of the blues rock, rock and electric slide guitar traditions, was almost excluded from the movie. According to Bob Margolin, Muddy Waters’ guitar player who was there onstage, with regard to The Last Waltz, his website mentions how, “Only one camera was operating during our song, zooming on Muddy, but not changing angle.” Margolin also cites The Band’s Levon Helms’ book This Wheel’s On Fire, stating, “Because of time and budget constraints and Band politics, Muddy was nearly bumped from the show.”

A search of the track list from the original Woodstock vinyl collection shows the Jefferson Airplane’s only song was “Volunteers.” So, there is a larger purpose in extracting and then packaging content from important music greats and events. But like everything, vinyl music history and posterity does have a price. The Jefferson Airplane’s Woodstock Sunday August 17, 1969 Limited Violet 3xLP Edition retails for $63.00.