The fast pace and exceptional music production immediately stands out as complimentary and engaging. This is the first sign for listeners that something special has begun to unfold. In addition, the singer and visual artist’s voice is pleasant but driven, lending to an identifiable sound. Leo Lauren’s new single “Lovesick” suggests phrases like first-rate and excellently done. Pop and new wave enthusiasts take note as well. All of this and more applies to “Lovesick.”

As soon as the music begins, it is hard not to notice how the drumming radiates a fresh, rhythmic sense of timing and character which continues throughout thanks to My Chemical Romance’s Jarrod Alexander. A punchy bass line joins the rhythm battery and rapid guitar work adds to the song’s 4:33 profile. But that is not all. The instrumentation is layered, clear and comfortable, conveying a new wave-ish feel. The music flows perhaps a bit like The Smiths or maybe The Cure. Even so, the beat and FM friendliness probably will appeal to rock listeners who enjoy different kinds of music now and then. Concerning categories, Lauren describes “Lovesick” as “Paradise Goth.” 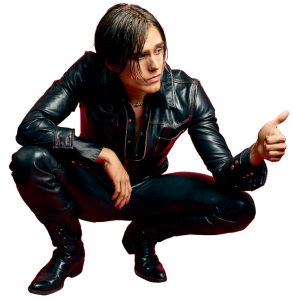 All things considered, “Lovesick” is made possible by a team of exceptional professionals.  But what separates the music of “Lovesick” is Leo Lauren. From a forthcoming EP collection, the Los Angeles-based vocalist and songwriter has nuance and appropriately increased volume during the chorus sections. The singer’s style influences the way the instrumentation of the band is heard. As far as recordings go, Lauren has presence. No wonder Queen lead vocalist and American Idol star Adam Lambert expressed a high regard for Lauren and the singer’s previous release “Supernormal.” This time around, Lauren projects the song lyrics of “Lovesick” with true ownership when he sings “No rest, no relief…”

The instruments and vocals during “Lovesick” strike a nice balance. Production is by guitarist and producer Heather Baker (NoMBe, Bea Miller and Adam Lambert.) Both the song and the EP are mixed by Grammy award-winning engineer Nathan Jenkins. In the main, Leo Lauren’s “Lovesick” is the complete package containing the accoutrements for a wider audience than just rock or new wave. Despite social distancing, Lauren has the type of sound that could be heard among the blankets, radios and music streaming services of this year’s summer beach goers.

Outside the recording studio Leo Lauren is a multi-faceted artist involved in painting, drawing, sculpting, writing, video production and other mixed media.