A top hard rock release during the first half of 2020, Smackbound’s debut, titled 20/20, draws on personnel from bands including Wintersun and Stratovarius. There is a fine mix of melody and rawness to the collection. Released by Frontiers Records, much of Smackbound’s musical impact can be attributed to founder and singer, Netta Laurenne.

Laurenne, also a pentalingualist, is a classically trained vocalist and actress from Finland whose range and theatrical abilities drive the emotion of each song, enabling a smooth transition from angelic to raw and edgy. Check out the videos for the first two singles, “Drive It Like You Stole It” and “Wall of Silence” for an overall sense of the album and Laurenne’s attitude. Smackbound offers variety within a rock sound. For these reasons and more, musicinterviewmagazine.com eagerly spoke with Netta Laurenne.

*Follow the bolded links and images for more music and information.*

An Interview with Netta Laurenne

Musicinterviewmagazine.com: What inspired you to form Smackbound and what were your goals for the band?

Netta Laurenne: I wanted to do something with a band and not solo, as I had done earlier. I wanted also to play more hard rock and metal and for that music it felt only natural to form a band rather than working with “hired guns,” or session musicians. I wanted to feel that family vibe of a band and see what we could create together.

How did your other training, including jazz and acting, influence the making of 20/20? On which songs do you think?

Acting really doesn’t affect singing or songwriting other than trying to be a good storyteller, to really be able to transmit a feeling. Jazz is present in many harmonical things, rhythms and even in some phrasing. 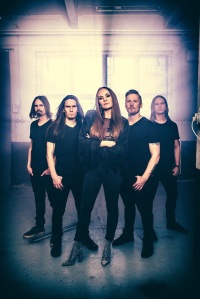 How much of a conscious decision was it for you to make a hard rock/metal record as opposed to another subgenre, like symphonic metal?

Very. I am not the biggest fan of music that is overloaded with synths and sounds so that everything becomes overloaded and stuffy. But I’m actually into more raw and simple arrangements. I even played around with the idea of not having any keyboards at all in the band but I’m happy I chose to have them as Vili Itäpelto is great and adds so much to the songs with his playing.

Among other things, you excel in seamlessly switching from melodic to menacing. What is your approach to singing and projecting? What techniques do you use for vocal training?

I use all techniques gathered up during my life and singing studies of classical music, contemporary, pop, jazz, blues and soul. But I really don’t think about the technical side of singing at all when I’m singing. I concentrate solely on getting the feeling out right. So I think about what sound would serve the feeling of that given part of a song best, be it a line, a word or a syllable. The feeling hence technique might change during one word. For me, it’s all about understanding the dramatics of feelings.

Your singing is angelic on the track, “Hey Motherfuckers.” Were you using your voice in that way to project or deliver the irony of the moment?

Yes. And the song is not about hate but more of a slap in the face for the ones acting brutal, using power wrong and being unfair and unkind to others. I felt it should have some sense of release, empathy and humor in the singing sound. It’s like telling your kid to behave better.

“Run” is another standout. The chorus creates a deep groove, almost like a tribal beat.

I am a lover of tribal beats so we wanted to play around and do this very energizing, groovy beat. I used to dance samba when I was young, so I’ve always loved rhythmic drumming.

“Drive It Like You Stole It” has gotten some great airplay and exposure. How did you know that would be a leading single, perhaps even a mission statement for Smackbound?

I felt it. I follow my intuition one hundred percent and once I heard the demo version of “Drive It Like You Stole It,” I knew it was our first single. We only had like five songs ready by then, but I was certain. Then I wrote the lyrics to it to serve the statement we wanted to make; that is, to empower everyone to trust, love and respect themselves and

How did the 20/20 album title take on a new meaning for you once COVID hit?

I think all this time we’ve had for introspection, thanks to COVID, has really worked the way I wanted 20/20 to work. I wanted it to encourage people to look and search deep into themselves. The songs have a lot of that projected into the lyrics, as that’s the only way to true happiness. I never could have imagined though that the time was stopped to make way for this process in everybody’s life. So the 20/20 vision really hit us hard with forcing us to stop and see more clearly.

This has been an emotionally draining time for a lot of people and severely hard in many ways. I think it has made a lot of people look back on their lives and rearrange many of their values. And I think that is a positive thing. That’s what 20/20 was asking for.

How does Smackbound benefit from your experience in other areas of arts and entertainment and musical genres?

Probably in a lot of ways but I can’t really see them as separate from each other and myself. It does give depth, understanding, sensitivity and versatility.

How does being from Finland influence you as a singer and actress?

Maybe, it’s honest and no bullshit, as Finns tend to be. [Laughing] I’m a hard worker but very bad at self-marketing.

What do you think about the musicians impacted by being unable to perform live and basically earn a living?

The sad truth is that a lot of people are thinking about changing professions as one can’t support oneself as a musician. I think it’ll take quite a long time to actually get things back up and running again once this pandemic clears out. That said, for many, music is a way of life and a calling so you can’t run away from that. It is a solid part of who you are. Things might change on the live scene but new music will always be made.

For more about Netta Laurenne and Smackbound, please visit: