Officially endorsed by Gretsch® guitars, Ruzz has a punk-born axe approach, where R&B and rock and roll tendencies often collide with tradition in a slew of original riffs, licks and leads. A serious social media marketing enthusiast and techie, Ruzz’s waters run deep and in many directions. As a result, the UK artist, whose last name is Evans, brings a fresh line of attack in a variety of ways on the Burn Out collection.

Taking the Songs for a Test Drive

The title track from Burn Out is an instrumental packed with guitar reverb and plenty of single string runs, invoking

thoughts of Dick Dale’s surf tuneage. Ruzz has created a wickedly delightful vehicle for his playing prowess, not resting until the final moment of feedback, which marks the end of the 2:44 song. Of course, drummer Zachary Evans and upright bassist Joe Allen provide the perfect battery to Ruzz’s picking. Sean McBride and Rachel Hutchinson deliver the horn work. Listen how that screaming sax is something else. But remember this is just the opening track.

Another standout, “Moving On,” grooves to an R&B vibe via some rocked out vocals and a memorable riff which could be mistaken for a Stax record hit during its heyday. Horns pound out the short repetitive phrases before Ruzz kicks into his axe solo roughly halfway through the cut with the volume knob turned down just a bit for slightly cleaner playing. Meanwhile, “Under Your Spell” takes a walk on the funky side with a trippy wah pedal, complementing the smoky vocals and brilliant sax leads. Later on, a harmonica subtly weaves in and out of the horn play. You can hear how Ruzz has taken classic rock and roll and blues elements and turned them into something all his own. But he’s not done. 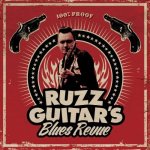 Straight out of Southside Chicago, “Troubles on My Mind” is strictly a blues number featuring a bassline piano intro, honking harmonica and Muddy Waters-type of turnaround. Take a listen to Ruzz’s lightning runs, triplets and bends as he romps up and down the neck of his Gretsch G6139T center-block Black Falcon. Those gritty vocals only add to the juke-joint-jumping for sure. If that’s not enough, get ready for “Ain’t Nothing Wrong with the Blues” and the feverish guitar frenzied “Dirt Track.” Whew!

Musicinterviewmagazine.com caught up with Ruzz Guitar where the artist talks about Burn Out, trio sets, his recent tour in the United States and much more.

You are endorsed by Gretsch® guitars and recently made the “Featured Guitarist” on the company’s official website. How did that come about?

2017. To say I was honored would be an understatement. It’s been a dream of mine since I started playing music professionally to be endorsed by Gretsch®. I never thought I’d be endorsed this early on, never mind being a featured artist. Being included in the Gretsch® family alongside many of my heroes like Brian Setzer, Billy Gibbons, Darrel Higham, Paul Pigat and others is my proudest moment, one that will always be at the top of my achievements.

Why do you think Gretsch® is the guitar of choice for so many rockabilly artists and rock and rollers? What model(s) did you use for Burn Out?

I personally can’t speak for many players, because a lot of the time it comes down to personal taste. The common thread with the majority of players in the rockabilly and rock and roll scene would be the unique tone and twang that you get from a Gretsch® and I have to agree. For me it’s a tone unlike any other guitar. As soon as I heard Brian Setzer playing a 6120, I knew that Gretsch® guitars were for me. The tone is what I’ve had in my head while the guitars just felt more comfortable. On my recent album Burn Out I used a Gretsch® G6139T centre-block Black Falcon for all the electric guitar parts and a Gretsch® G-5034TFT Rancher Fidelitron for the acoustic parts. The Falcon is so versatile that we managed to get multiple tones out of the guitar with very little work. I love it.

Pete Gage, from Dr. Feelgood, is a special guest on your latest album. Have you worked with him before? How far back do you go with fellow Blues Review bandmates Zachary Evans and Joe Allen?

We hadn’t worked with Pete before the album was recorded but he plays with a lot of musicians who I know from Bristol. We had gone out to a fair few shows that he was playing at and my musician friends introduced me to him. After a few times meeting him and chatting I asked if he would be interested in guesting on our next album. He said he’d love to. This was another honor as I grew up listening to Dr. Feelgood, so to have someone who worked in the band guest on the album was another big highlight in my career. We’ve only done one show together since the recording but we are trying to arrange something in the near future.

As for the other band mates, I’ve been working with my bassist Joe Allen for about nine years. We played in various bands together around the Bristol area before I started up Ruzz Guitar’s Blues Revue. When I decided to put together my own band I knew who I wanted on bass. And I’ve known Zachary Evans for his whole life, as he’s my youngest brother. When our previous drummer decided to move on, we went through various other drummers and used dep players to fill the slot until we could find a regular. My brother was already joining me and my dad at a gig we played in Gloucester, sitting in on drums. He mentioned that if we wanted, he would be happy to drum for my band. We tried him out at the next gig and considering he had no prior lessons he did pretty well. He’s been in the band ever since.

The band recently toured in the United States. Do you have plans to return anytime soon?

That was another highlight of my career. Back in April this year, my partner and I went out to the USA and a bunch of friends put together bands for me in various cities. They set up some gigs, radio exposure and helped to start up the interest in America. I’m heading back out in January 2018 for the Winter NAMM show in Anaheim, California, thanks to Gretsch® for making the arrangements. Then it’s over to Nashville to do a couple of shows with a friend of mine, Rebecca Hosking and her band. I’ll be back again with my bassist, Joe Allen, in May for additional shows around the country. I really can’t wait to get back out there.

Usually within my sets, I try to mix up many different styles that have come from blues music. When we have our horn section, it enables us to do more of the soulful side and the big band swing side of blues. But when we’re just a trio, it gives me a chance to feature more of my solos, play more R&B and rockabilly, where horns may not work or feature the other two members in the rhythm section. Having two line ups gives us the opportunity to create two different shows.

Why is social media so important for working musicians?

It really helps musicians get their music out to a bigger audience. With something like Facebook, you can have everything about your band in one place. For not much money at all, you can promote that to thousands of people who could be interested in your music. You can build your fan base much quicker than before. It’s really helped me with my career. Now I have fans worldwide and in places I’ve never been.

As I mentioned earlier, I’m off to the USA again next year and Canada in late October. We’ll also regularly be playing around the UK. We’re currently working on a new album which will include a bigger horn section, backing singers and more. Think The Brian Setzer Orchestra and you’ll be pretty close. We’re looking to release the album in August 2018 after our next USA tour. We’ll be hosting an album launch party in Bristol and releasing more information as time gets closer.