Rock On The Rise Interview: A Showcase of Distinction for Artists, Listeners and Venues

With eager enthusiasts encountering a swell of Internet radio shows, finding a solid music webcast can be tedious and sometimes burdensome. So what does entertaining web radio sound like? That is precisely where Rock On The Rise comes in, or ROTR. Climbing new heights, while powering across geographic boundaries and easily toppling music stagnation, ROTR radio is thoroughly equipped with the finest rock and metal artists, both signed and unsigned.

Serving up programming specialties with a keen focus, music aficionados will want to make ROTR a regular part of their listening repertoire. An expression of strength through variety, while providing music muscle, ROTR spins what the station calls “curated” tracks. The ROTR team goes the extra mile to bring listening pleasure to those interested in keeping rock music alive and well. Some of the featured shows include Saturday’s Shut Up And Jam! and Random Acts Of Rock, airing Wednesdays. But make no mistake, because ROTR has quality time slots every day, including band interviews, reviews and other articles. There is even a #ROTRArmy tab on the station’s web page which provides music quotes from well-known musicians.

An Interview with ROTR’s Shamas Maximus

In order to take a closer look at Rock On The Rise, Shamas Maximus, the creator of ROTR, shared some questions and answers with musicinterviewmagazine.com.

Musicinterviewmagazine.com: In a time when guitar-driven music is less prevalent on the sales charts, why an Internet radio show with a focus on hard rock and metal?

Shamas Maximus: Rock has always outlived the fads of pop music. It endures, regardless of the vapid goldfish memory of the pop charts. One thing you do not hear is watered down versions of good rock and metal in grocery stores six months after their release. Rock concerts are always attended and support a much more varied class and style of venues from arena to dives. I have been to both over the years and a rock concert is a much more visceral experience for me.

How did you come to establish Rock On The Rise radio? 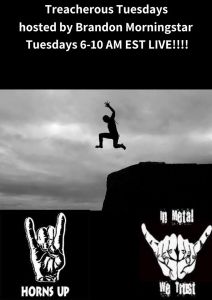 Despite my current love of modern metal, hard rock and metalcore, I am from an older generation and have seen over the years many great bands that did not get exposure because they did not know someone in the biz, or were unsigned and consequently shunned like a third-party presidential candidate in the US. I wanted to make a place that would allow quality music to have a voice and a chance at creating its own following regardless of label affiliation.

What is carefully curated hard rock and metal?

As I mentioned from the outset, the music we play, both mainstream and unsigned, requires quality. We will not play something just because of what it is. If some big label gave us some music we did not think met a quality bar, or did not jive with our blueprint, we would turn it away just as quickly as an unsigned band who has not found their stride in producing quality rock and metal. Though we are independent, we are not without resources, nor are we without the means to see where a developing band is or could go. I like the long eye’s view on things but above all, there

is a mark of quality to be hit to enter the station. We feel we have done a fairly good job of ensuring that real rockers will enjoy what we offer.

Is there any advice that helped establish your success?

I am not the type of person to give advice. Honestly, I feel there is so much more for me to accomplish and for the station to accomplish. That the blueprint may not work for someone else. In the interest of honesty, I also have no desire to advise people on how to compete with me. You would not believe the number of times people have expected just that. I get people wanting their own thing. I encourage that. However, when everyone is just doing what everyone else is doing, big corporate and their lobbyists adapt and hinder us all. I think that is one of the big things for us. I refuse to run the station the way others are run. We keep our style unique and a few critical rules that we follow are never open for discussion.

As a veteran gamer, what are some of your favorites to play?

This has been a discussion for me and some of my friends of a certain age. Much like pop music, I feel gaming has made the decline to a more short attention span money grab. There are still some out there doing their thing with pride and excellence but it is becoming rarer. Right now I am playing God Of War and Diablo III mostly. I am interested in what 2020 will bring; but right now, I would have to say it may not be the best year for games as we are on the cusp of the next gens for consoles and PC upgrades that are expensive right now due to some unfortunate trade policies. As is often the case, we will have to wait and see.

Do you believe video game music enhances playing or is it a detractor?

I think this depends greatly on the type of game. Back on PS2 there was a game called N2O and the music was absolutely an enhancement of gameplay. Generally, I do not pay much attention to or give a thought about music in games but there have been some recent games that had some really cool covers.

When can listeners catch your show?

My personal shows are Monday and Wednesday 5-8 PM Pacific and Saturdays Noon-3. We always do live shows so requests, comments and suggestions are always welcome. ROTRradio@gmail.com is the info email or people can catch us on social media which they can find on our official site http://www.ROTRradio.rocks.

For more about Rock On The Rise, please visit: