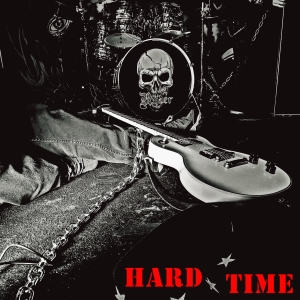 At about :08 into “Hard Time,” after an emphatic beat takes hold, the guitar and bass double up on some of the notes creating a thicker, harmonic character while conveying the musicianship behind the instruments. The rhythm battery is particularly close-fitting, at times almost funky and brought about by both the bassline and drums with a similar finesse. The lead vocals soon begin with a heightened anticipation and tenseness. Some of the lyrics to “Hard Time” reveal a familiar scene, but no less easy to bear for the person involved: “Standing in the courtroom/I’m waiting for the judge.” The outcome as told is “Guilty as charged.”

Lyrically, “Hard Time” tells a story with words as well as emotion. In fact, the singing helps push the music’s 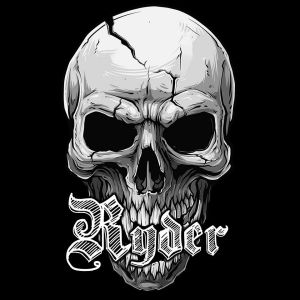 character with force and distinction. While a familiar song idea, Ryder’s delivery of the topic, getting in trouble with the law, is vocally visceral where necessary and ultimately persuasive. But it is not just about the vocals, drums and bass. Like good hard rock and metal tracks tend to do, memorable guitar riffs add to “Hard Time’s” musical charisma. Tuned to Eb, six-string boldness rings with conviction and amplitude throughout. Check out the solo at 2:49. On the whole, envisioning “Hard Time” as the theme to a series on Netflix or HBO is not out of the question. Production provides comfortable instrument separation within a unified mix. This is the electric side of Ryder.

For a taste of Ryder unplugged there is “Crash And Burn,” “Hard Time’s” flip side. Excellent bass work provides the intro, played clear and unhindered over some light percussion before the band begins pumping at :15. The acoustic guitar groove during “Crash And Burn” is absolutely addictive. The 4:44 cut’s instrumentation and arrangement are particularly outstanding. The vocals are vibrant with a narrative to tell about being burned, so to speak. The singing carries plenty of sentiment and harmony. Listen for the picking at 3:17. Acoustic, yes, but this is anything but stripped down.

For these reasons and more, “Hard Time” and “Crash And Burn” are recommended picks.

For more about Ryder and to support the band please visit: