Asphalt Valentine is a band rooted in hard-hitting, guitar-driven rock music. After a four year recording hiatus, the Atlanta, Georgia-based group returned in February 2020 with Twisted Road, released by HighVolMusic. The album marks a lineup change and a demonstration of exploring the lighter and darker sides in life, while branching out into other genres.

*Click on the bolded links for more music and information.

Elements of punk, metal, southern rock and blues are contained on Twisted Road’s ten songs, making the collection a stand out among other rock releases. The album was included among musicinterviewmagazine’s mid-year list from the “Must-Hear Albums of 2020.” Asphalt Valentine has graduated from songs about sex, drugs and other vices to lasting relationships and mortality, all without sacrificing heaviness. Check out the title track for the band’s hard-charging rock abilities and songwriting chops. 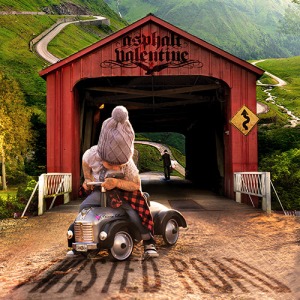 The songs on Twisted Road are elevated by frontman Joe Flynt’s soaring vocal work. The singer has broadened his range, perhaps zigging when he might have zagged on the blues thumper “As The Crow Flies,” tapping into his upper register during the chorus. Flynt also employed some snarl and swagger to the punk-riffed closer, “Rain,” getting a little more sentimental while paying homage to Rod Stewart’s version of the band Faces’ “Ooh La La,” written by Ronnie Lane and Ronnie Wood.

Musicinterviewmagazine spoke with Joe Flynt to discuss the band’s songwriting process, the local music scene in Atlanta, styles that paved the way for Twisted Road and more.

Musicinterviewmagazine: What is Asphalt Valentine’s typical writing process? How, if at all, did the process change for Twisted Road?

Joe Flynt: Most of the songs start with a riff or melody idea that I have. I typically start with a riff and then start building basic verse and chorus guitar parts. I have a small home studio and use Pro-tools, an Audient interface and a Warm [Audio] limiter and compressor. I start building drum beats then start recording my guitar ideas over that.  Once I think I have something, I let the music influence the lyrics. I’ll record vocals and then send the song out. The band will tweak and add or change parts, so that’s when it really starts to get the AV sound and vibe. We do also have songs inspired from other band members, who may start noodling a riff at practice and it just takes off from there. We didn’t really change that process for Twisted Road.

Did you consciously try to incorporate various rock styles into the songs?

Not for the most part. Most of the songs are just riffs in my head. Sometimes there will definitely be influences I go for when I think it will complement the record as a whole. But we come from all different backgrounds and have lots of influences. The songs just naturally incorporate all of those influences.

You had several more songs that were omitted from this album. How difficult were those decisions? What are the chances those songs appear on the follow-up?

Most of those were not tough, because most of them were not either fully developed with the band, or it’s not

something the rest of the band has even been shown yet. There’s a great potential for these songs to show up on the next record. Though I think we are going to have a lot of material to choose from. The guys are really excited and coming to the table with lots of ideas. The songs that come out the best will make it.

What are some challenges AV has experienced? What were some of the highlights and opportunities?

We’ve definitely had challenges. The various lineup changes have probably been the biggest challenge as we probably could have had at least another record out. But all that’s done and we’re ready and excited to move forward. We’ll face some of the same challenges that all bands do, including booking shows, the cost of touring, getting our brand out, etcetera. But we are ready to face those challenges. Our label has made great moves and we feel there will be lots of opportunities to play larger festival type shows and even play over in Europe in the next year.

How would you describe the local scene in Atlanta? How has it changed since the time Asphalt Valentine started playing?

The music scene is still strong in Atlanta. I would not say it’s as strong as when we first started. There were a lot more clubs open and a lot more original music. The cover and tribute bands do well here and they are very talented. But people still enjoy original rock and they will come out.

How does being from the south influence your sound?

I think being from the South, there is a natural influence in our sound. We grew up listening to Southern Rock among lots of other types of rock. I probably like to bend the strings in my riffs a bit more, which some will attribute our sound to that Southern influence.

You cover “Ooo La La,” a rock song often heard in commercials and film. Why did you choose that song and what do you feel the band brings to it?

We love the Faces. They are a great band. A few years ago we were contacted by a producer in L.A. to do cover songs for a movie. That never took off, but we redid a lot of the songs in our own style. We loved the way “Ooh La La” came out. It’s a much more upbeat grittier version, while still keeping that fantastic melody. As a tribute to Rod Stewart being in the Faces, we threw the “Maggie May” riff in the last chorus that I thought was fun.

What are some other unique influences on Twisted Road that might surprise fans or anyone hearing you for the first time?

We all have lots of influences. In the song, “Rain,” there’s a bit of the band Edguy, a metal band out of Germany. Scott loves thrash and he started playing triplets on the bass to “Dixie Rose.” Our guitar player, Brett comes from the old Aerosmith and AC/DC school and he plays a lot of broken chords and just adds that old school real rock feel. Our lead guitar player on the record, Evan has a Neal Shon influence and he has some fantastic leads on the record. Our drummer, Brian, loves it all. He stays in the pocket and really drives the songs.

You look like you’re having a fun time on the “Twisted Road” video. Do you enjoy shooting videos and how do you feel they help draw an audience?

We love to do music videos. We think they are absolutely necessary for promoting the band. YouTube can be a major source for people to discover our music if we have a good video to go along with it. In fact, we are getting ready to do our second video for the song, “Saving,” this month and hope to do at least one or two more.

COVID-19 notwithstanding, what are the challenges of being in a rock band right now?

There are lots of bands out there in our same position. It can be difficult to break through to an audience when the audience is being presented with so much music. It can be easy for a potential fan to skip over hearing new songs, because so much is thrown at them. But if we keep putting out quality material and being persistent, we feel we have a great chance to break through. It’s always been tough for any rock band. Bands like us do it for the love of the music. We’ve been together for 15 years and we have plans to keep putting out music.