Recording Artist Be a Bear: An iPhone Is His Studio 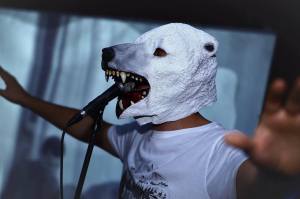 The songs typically take a cue from synthesizers, 80s music and degrees of tribal rhythms, creating what the artist calls “Electro-Bear-Pop.” A cut like “Say Goodbye,” keyboards grooved against a synthy pulse, helps define the unique tag. But there is more. Accompanying the tracks, the YouTube videos are thoughtful and entertaining in themselves. For those who thought this is the end of the story, think again. It is time for Be a Bear.

“Waiting for My Lover,” a 2:22 video in the Be a Bear catalogue, is clever, insightful and pleasantly amusing. The imagery opens with a medium-size, decade’s old portable boom box before the title appears in large red print, an indication of something less than entirely serious. The song proceeds with the sound of a radio, scanning, as The Eagles’ “Hotel California” is heard in passing. After that, the only lyrics to the cut are the mantra, “Waiting for my lover,” repeated several times.

The music for “Waiting for My Lover,” suggests a vibrant, repetitive electronica, achieving a mesmeric club feel. The arrangement and rhythm add to the atmospherics, sonically upbeat and fun to hear, while maintaining a

certain furry-friendly mystique. The source of the Be a Bear charisma is Italian-based musician, Filippo Zironi.

The video for “Waiting for My Lover” was filmed during 2018, premiering in Apr. 2020. The track is from the album Climb Your Time. The live footage according to Be a Bear, is “Kind of a social experiment,” using just “A room, a camera, a sofa” and “thirty friends.” That is where the cleverness surely lies. Proof is in the watching and listening.

As interesting as the songs, contemporary methods used to craft Be a Bear’s music is complete artist autonomy in action. The music is composed, performed, recorded and mixed via iPhone, which in essence became Be a Bears’ production studio. He even edited the videos and created the graphics on an iPhone. Interesting to note regarding musicianship, on some of the songs Zironi employed his daughter’s toy instruments. Adding new definition to the idea of independently made, the musician has given rise to what he calls, “Smartphone music,” or just “Phone music.”

For those wanting to be in the know, the band’s name is inspired by Zironi’s trip to Canada, where the artist embraced Native American culture up close as a guest of the Mohawk tribe. But the music also reflects duality in moving forward through the use of iPhone technology.

For more about Be a Bear, please visit: