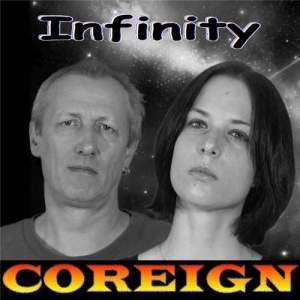 A divergent cross-over style of fusion, authenticity and imagination describes Infinity, the new album from the band Coreign. The married, multi-instrumentalist singing-songwriting duo Corrine and Reto Bachman have released a collection of 13 original songs, shimmering with a distinct, modernist feel. While Reto counts hard rock, metal and punk as his influences, Corrine typically favors the sounds of progressive artists. Together they have created their own brand of music. But the story does not end here.

Songs from ‘Infinity’ and beyond

The opening track of the new album, “With You I’m Done,” sports a heavy beat, thick guitar line and an orchestral studio mix perfectly matched with Corrine’s edgy, metered voice. The result clearly is a winning music formula. It is no surprise the Swiss-based studio band has received a convincing degree of Internet airplay, including among others, recently being ranked number nine on the UK Radio Indie Alliance (RIA) top ten charts.

In another standout from Infinity, “Blue Seas,” Corrine’s vocal approach has a bit of an Evanescence meets Nightwish quality, lending to Reto’s adept instrumentation and the song’s overall composition. The production is clean and the mix well-balanced. Following suit, “Leave The Night” is rich with hard rock drama and symphonic crescendo. There are other gems, too.

According to the band’s website, Corrine, who shortened her name to Curry and Reto understand “progressive music as being more avant-garde than a fixed genre.” In fact, the two musicians refer to the band as a “musical chameleon.” Coreign’s discography surely proves that to be true.

Music Interview Magazine caught up with Corrine and Reto where they discuss Infinity, their previous releases, the

What prompted the recent re-release of the EP Silence?

Silence was the seventh release with the old band name Core and if you count all the albums and EPs, it sort of was the right time to do so. It is our 14th release, not counting the single, the special limited edition volumes and Sphere as a separate release from both Core and Coreign. It is 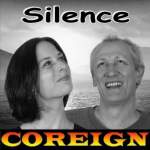 not intentional, but maybe this reflects that the time was up. Interestingly enough, the songs that we love most are not always the same songs that the DJs air. Also, the songs we love and get aired do not seem to be the songs that our listeners stream and download the most. Looking at the figures, the songs from Silence are all in the top 15 positions of the total 150 songs, so this re-release was mainly for the listeners as the old albums were taken off the market. It is a very un-typical instrumental and chilling song collection. But the listeners seem to like it very much.

You describe the music on Silence as “chilling” and different compared to the current Infinity album. Why such a departure?

Silence was composed and produced as background music for the visitors’ recreational area at the Swissbau 2015 exposition, which is the biggest yearly architectural and house construction exhibition in Switzerland. As composers, we love to sail to different shores and these tunes are clearly not Coreign’s usual progressive, hard rock style. But it was a very cool project and different from what we usually do. Because the feedback was overwhelming, we decided to release it even though it is sort of a strange fruit for Coreign.

Your albums and EPs typically use one word in the title? How did that come about?

Over time we tried to develop our own style, sort of a brand that everybody could recognize. Apart from the gradient red-yellow logo, black background and the picture of us two, the first four albums, Level 1, One Step Further, Platform and Stage, used the old elements of earth, air, water and fire. Then, Spotlight was sort of a turning point towards a contrast and with The Tide we turned to black-and-white covers. Silence, our seventh album, was special, as mentioned above. Then with Sphere we decided to change the band name from Core to Coreign. Sphere was re-labeled and released under the new name. At the time, five of the eight albums had a one word title, which was sort of cool because the shorter the title, the bigger the letters that you can use. So it was easier to read and very practical. But we soon stopped using fancy effects and put good, readable titles on the albums. In the beginning we tried to express where we were and how we felt in our development. Sphere, together with the change of the band name, was again a turning point. Now we use titles that have a special meaning in describing the aspects of each album, though they may not be as obvious.

Are you both still soaking up all possible musical influences?

Yes, sure. Our listening tastes are extremely broad when it comes to music. We’re both fond of film scores,

musicals and symphonic tunes, including classical music, from a composer point of view. Personally, I also listen to all sorts of jazz. While Curry is into the more modern progressive part of Coreign, as she loves songs from Nightwish, Evanesence, Within Temptation and others, I grew up with Yes, Pink Floyd, Magnum, Genesis, Camel and similar bands. If we had to name one band where we have a common interest perhaps that would Dream Theater. However, composing is our main focus and we do our own thing in collecting influences and ideas while experimenting with them and creating new combinations of elements. The outcome is seldom intended. It just happens. For example, in one song we wanted to repeat the chorus. To gain more tension, we decided to lift it two entire tones for the repeat, which is standard in pop and rock. But then we tried it with three tone steps, then one tone step and finally found out it sounded better that way. Or sometimes we experiment with harmonies that don’t follow the regular handbook. The music we hear is an inspiration for our experiments and ultimately limitless.

For the time being, we sort of found what we are looking for and feel very comfortable being a two piece studio band. Sure, there are always discussions about guest musicians or to form a project band and go on tour. But for now, the home studio is a perfect set up. We have maybe 150 song ideas waiting in the drawer to be produced, with about three new ones every month. The first album we released sounded much better than the basement tape recordings we did before and we’re very proud of that. But now, 13 albums later, we have developed even further, both crafting songs and technically. We’ve learned a lot thanks to the professional feedback we get and the tech blogs we study. Doing everything on our own, we are sort of our own small studio and label with extremely short decision and execution paths. We learned a lot about the music business and have become completely independent. You could say we are constantly working on the next album.