The list of endorsements for guitarist Steve Bello reads like a page from musiciansfriend.com and with good reason. A skilled professional with six and seven string axes, Bello’s Marblehead collection contains eight original high-gain instrumental guitar tracks. The New Jersey-based music artist has an atomic sound both in the studio and at live shows. But this is just the beginning of the story.

An Interview with Steve Bello

You have a signature effect pedal from Checkered called Nuclear

Paradise. What type of effect is the pedal? Was Nuclear Paradise used on Marblehead?

The pedal has a phaser on one side and a chorus on the other. You can use them independently or together. The phaser effect can be heard on “A Message For Mercury.” The chorus can be heard on some of the cleaner tones here and there on the CD.

How did you record the guitar parts for Marblehead?  Were the amplifiers’ cabinets mic’d and was any re-amping used?

I used my Orange® CR120H and PPC212OB cabinet for the entire album. There were other amps in the studio, but I stuck to using my rig one hundred percent. Yes, the cab was mic’d. Some things were also re-amped.

Can you tell us, how did you come up with the name Marblehead?

Back in late 2015, I worked at a temp job sorting out Christmas cards and calendars. I would get bins and bins of stuff to ship and the one city that kept popping up was Marblehead, Massachusetts. It was kind of like a Joe Satriani-sounding title, so I wrote it down. I didn’t have any music for the title or an album cover. I had a working

title and cover, but once I wrote the song that eventually became “Marblehead,” everything else fell into place.

Do any modelling amplifiers ever have a place in your guitar rig during studio sessions or at live shows?

I used Line 6 stuff on earlier albums, including the 2015 CD, Layers Of Time. I also used some plug-ins through ProTools, as well as my amp. But overall, I always used amps, both in studio and live. I’m super happy with my Orange® gear; it’s the best. And the pedals I have make me feel like a mad scientist.

What expresses your creativity better, six strings or seven?

When I began using seven-strings back in 1999, I learned that it opened up my writing style. I can still be creative on a six-string, but once I started utilizing sevens, I really never looked back. 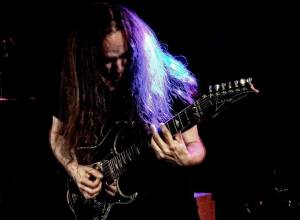 How important is guitar pick selection with regard to tone and playing style?

I didn’t think too much about picks until I discovered jazz picks by accident in the summer of 2000. Those picks changed everything dramatically for me. I went with another brand for a few years, but then Pete at Swiss Picks® dropped me a line and asked if I would be into trying his picks. I saw he had jazz-style, so I agreed to try them. I use the Swiss Picks® Rusty Cooley picks in nuclear green, of course. These picks give me a great tone and my accuracy has never been better.

When Lita Ford is in the New Jersey area, you have been invited to play as a special guest. How did you meet Lita Ford?

I never actually met Lita Ford before. I saw her briefly at NAMM in 2014. She had the longest line at the BC Rich booth. This will be my second time as a guest on the bill. It should be a great show.

What’s next for Steve Bello?

Right now, I just want to get the new album in everyone’s hands and ears. And hopefully score a small tour as an opener for a national act. My dream is to open for Living Colour, so if they are reading this, please feel free and hook me up.